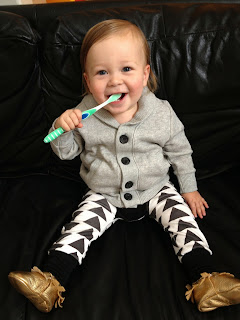 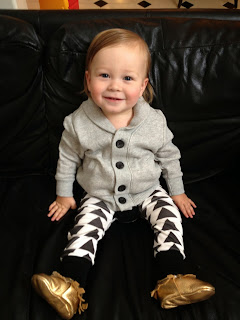 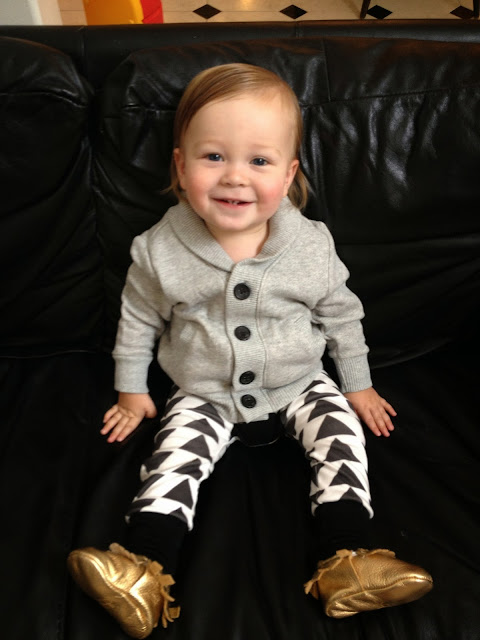 Even though they were tedious I miss my monthly updates of Kingsley. He just changes so quickly it's hard to keep track of everything. I do want to jot down all the things I can think of that are new as of 12 months since he is now almost 16 months! I have also included an array of iphone pics from the last couple months. 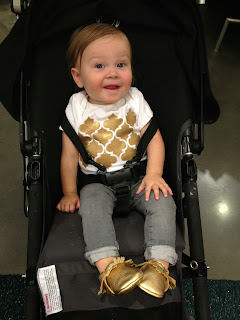 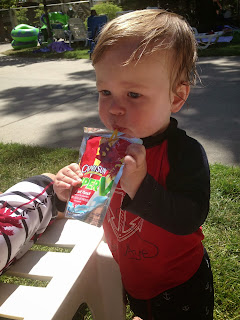 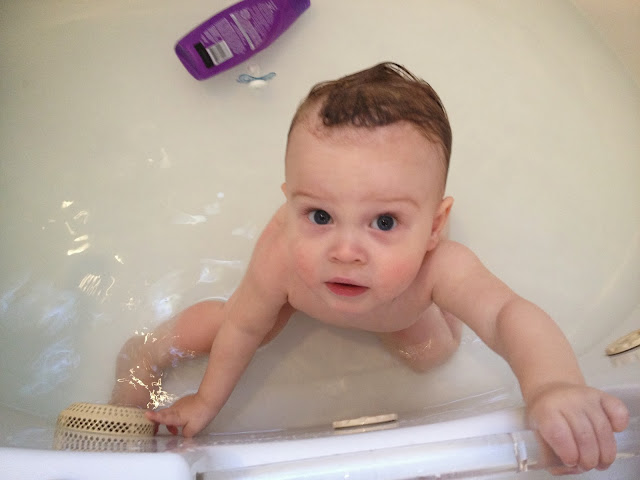 He now walks or mostly runs everywhere! He reminds me of a pinball machine, just bouncing from side to side of our house. He has recently started climbing on everything so I have to watch him more closely. He is really tough though, because even when he falls he never cries just whines "owie owie". Which sometimes I regret teaching him since he fakes "owies" a lot, but oh well. 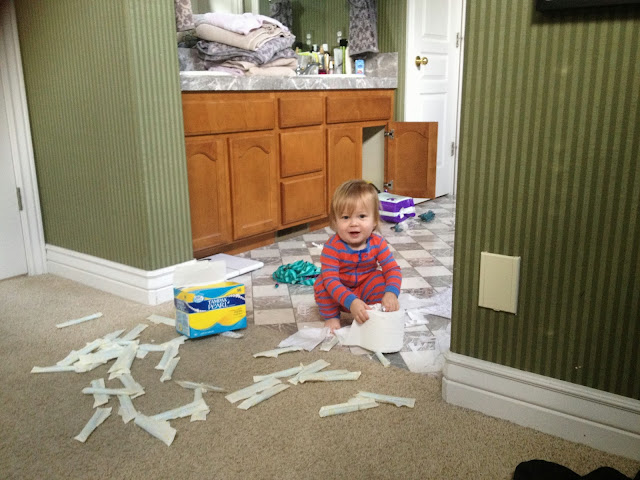 This kid of mine has become a major mess. (Example above) He loves to wake up and pull out every toy he owns and scatter them about. If I am not watching closely they can end up in the most bizarre places like the garbage can, toilet, freezer, window seals, and the hamper. So basically he is really good at hiding them. Kingsley enjoys throwing the pillows off the couch, pulling clothes out of the drawers he can reach, and pulling out pots & pans and everything else out of the lower cabinets. So mostly I just spend all day cleaning up after his messes. The only one that really irritates me is when he dumps out Diesel's water bowl, which happens at least once a day :( 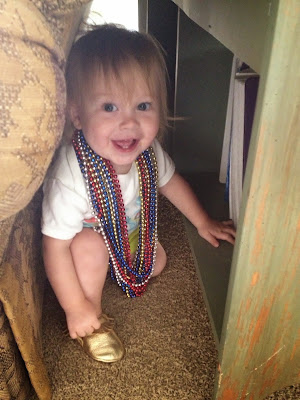 Speaking of Diesel, Kingsley loves him so much. Diesel is currently the only one Kingsley will give kisses to. Diesel is the first thing he asks for when he wakes up. (He calls him "Dies") Diesel on the other hand pretty much hates Kingsley unless he is in his high chair dropping down food. I cannot for the life of me get Kingsley to be "soft" with Diesel. He tries to sit on him, pull his ears, hit him with toys, and pull his legs. Diesel has nipped him twice now in self defense, but that doesn't seem to scare him off. Hopefully they will become buddies one day. 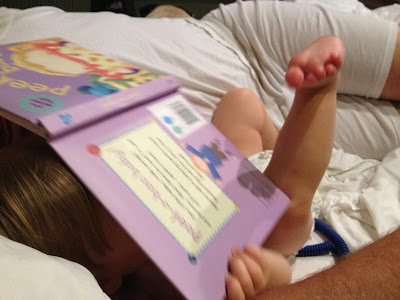 Kingsley is a little chatter box, I swear he never stops talking all day. He now knows lots of words and can copy mostly everything I say. Some of the words I hear most often are: Dies, ball, outside, go, bye bye, all done, ice, bite, up, down, no no, night night, bobby (bottle), mommy, daddy, hi, wa wa (water), golf, owie, again, and about a million more though it just depends. He knows a lot of animals and can make the sounds of a cow, horse, duck, cat, dog, monkey, pig, bird and train. He is obsessed with ducks right now, so we often go down to Barnes park so he can feed them. Although he loves reading and playing with animals he still is very afraid of actual animals. 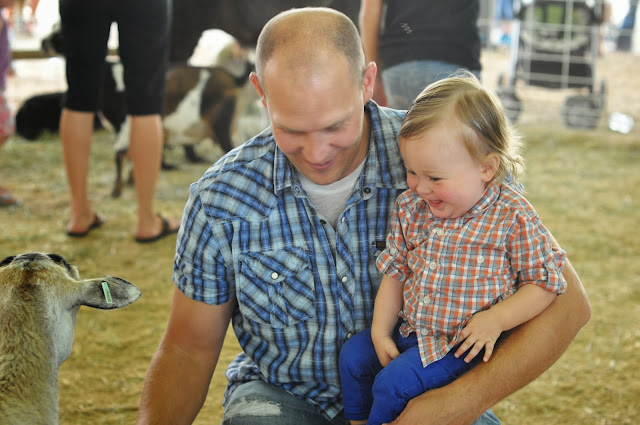 A typical day for Kingsley starts at about 8:15 when he wakes up. He is usually still sleepy and whines for a "bobby", so I make him one and we cuddle in bed while he drinks it. I am trying to wean him off bottles, and have mostly during the day but morning & night seem harder to break. It also doesn't help that he refuses to take milk in a sippy cup. I then let him run around and get out all of his toys. At some point he brings me Diesels collar & leash and asks to go outside. So I load him up in the stroller & the three of us go on a walk. Kingsley enjoys chatting to himself most of the time. When we get back Kingsley insists that he give Diesel his treat, though he has eaten it himself before.. yuck! We then sit up for breakfast. Kingsley typically eats oatmeal & a banana every morning though I do give him toast, yogurt or fruit occasionally. The rest of the morning usually consists of King making messes while I do chores. He plays pretty well by himself, but prefers I am in the same room. At between 11-12 I put King down for a nap. Not sure what his nap schedule is because some days he sleeps for 3 hours where as other days he only does an hour and a half. So right now we are going back & forth between one and two naps. Afternoon/Nights aren't really scheduled like our mornings. We run errands, go to the park, read books, but Kingsleys favorite is to go golfing with dad after work. We chew on the nugget ice and he likes to run around and throw golf balls. I'm excited for when he can actually go play with Jeremy. He is getting to be a better eater but mostly enjoys, cheese, yogurt, spaghetti, mac & cheese, grapes, chicken, peanut butter & jelly sandwiches, peaches, and watermelon. I am trying to expand his food selection but get frustrated because even with food he likes he will chew it up and then spit it out randomly. 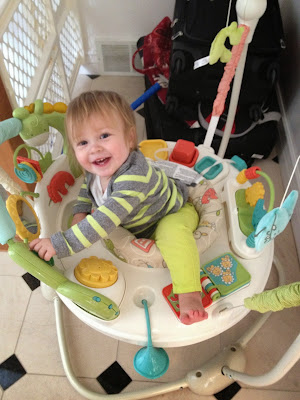 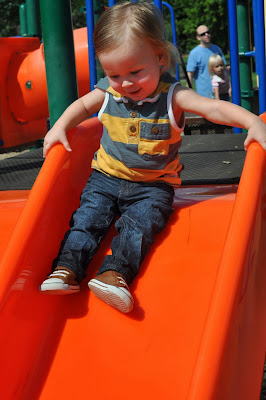 He is at such a fun age, he does the funniest things! I enjoy so much watching him explore and try new things, though he can also be exhausting to chase around. He mostly loves to just be outside which makes me dread the colder weather.. 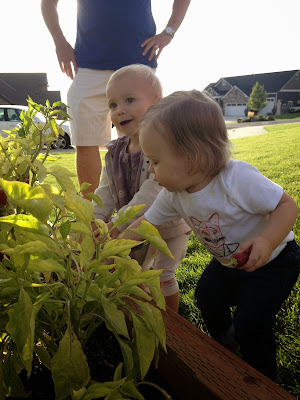 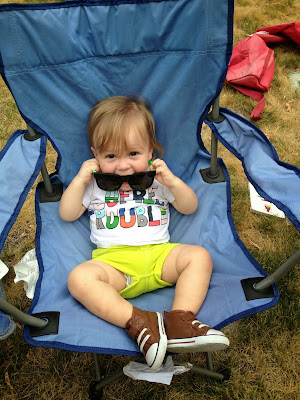 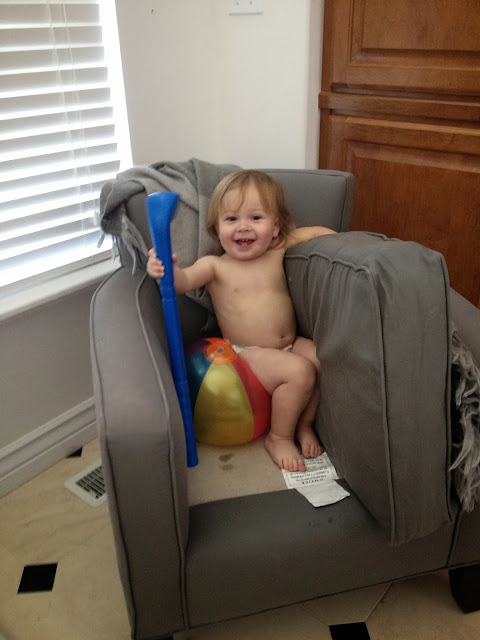 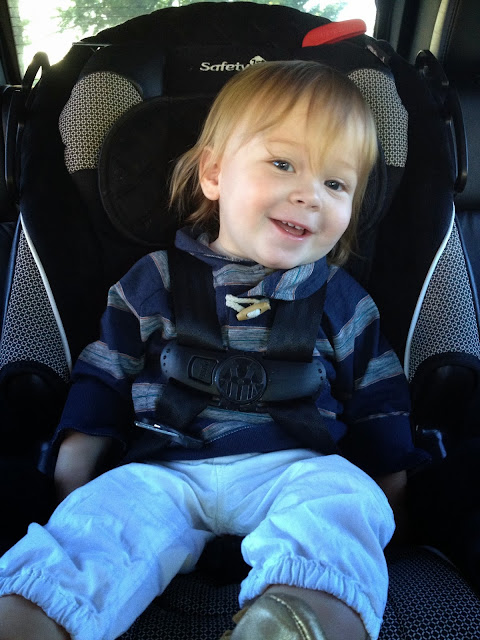 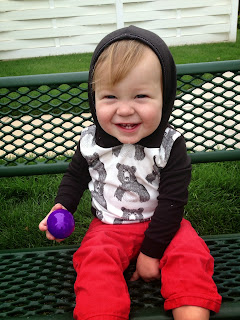 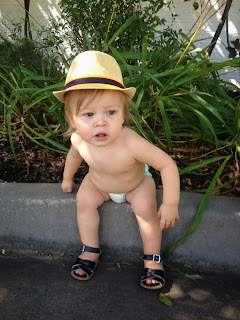 He loves being around other kids and mimicking what they do. 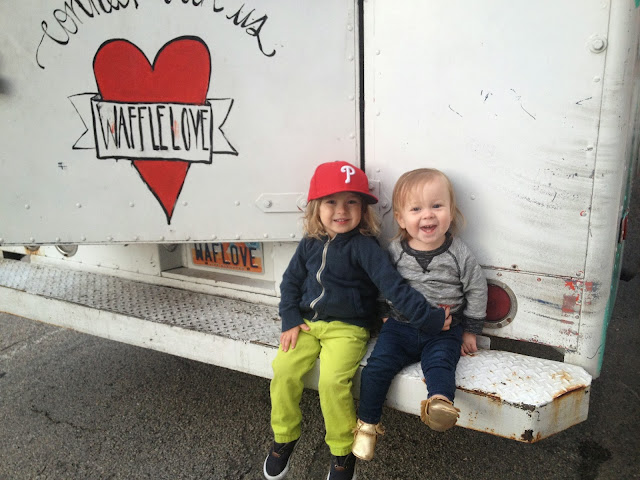 Jeremy and I just feel so blessed to be this sweet boys parents. He is the greatest! 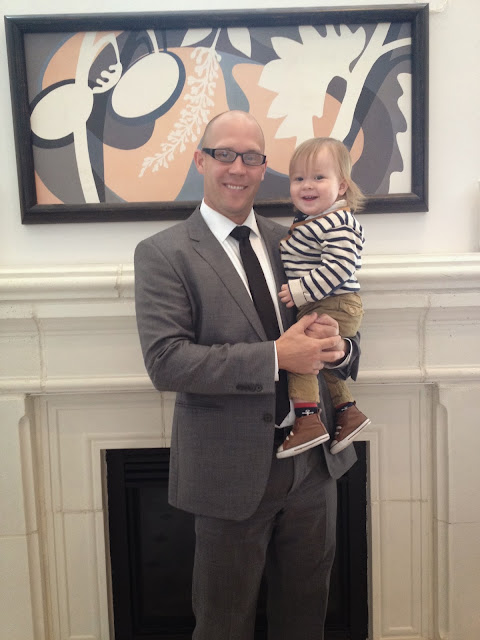 Posted by Cassandra Potter Kemp at 11:59 AM No comments: 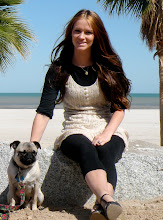 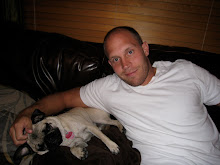 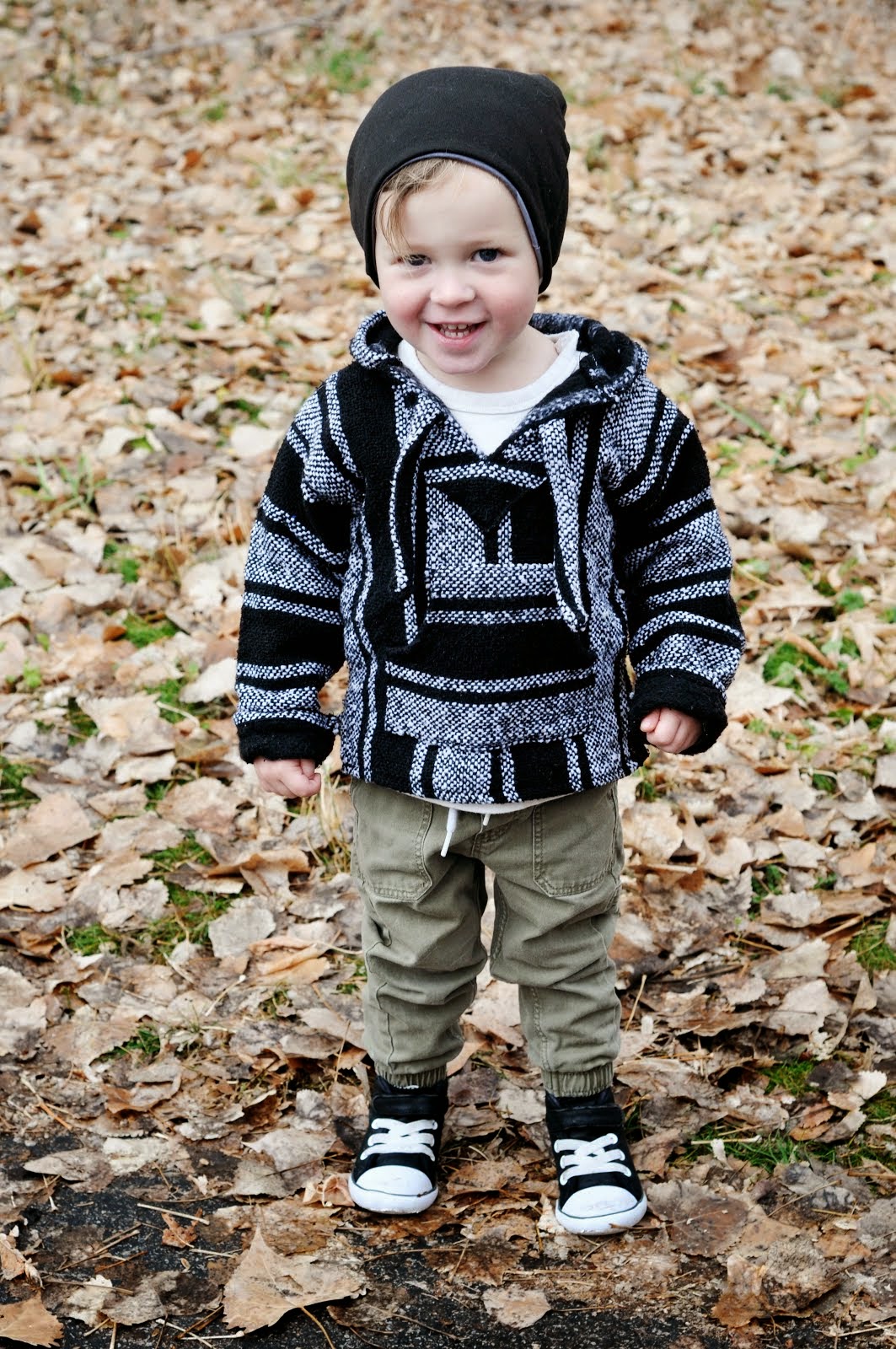 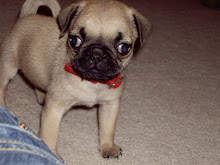